A few weeks ago we began pre-production on a music video shoot for the BTB song “Siren” from our new CD “The Coyote & The Crow”. The director and I came up with a concept and jotted down some thumbnail sketches. The following week I story boarded 27 panels (sketching, importing and coloring in photoshop) from 8am until around midnight for 5 days in a row. Next our director created an animatic to sync the music to the story boards in sequence so we could see how it all paced out.

Shortly after the animatic was complete, we began the casting process. We needed a mermaid. I had an actress in mind but it was unclear if she would be in LA during our shooting schedule, so I had to reach out to a few other actresses. It turns out that most female actresses REALLY want to be a mermaid. We got a lot of enthusiastic responses for the role. In the end, the actress I wanted, Renee Kay, was able to shift a few things around to make herself available during our shooting schedule after all. A few weeks ago we fit her into a mermaid tail that we had purchased on ebay and began to rehearse with her swimming with the tail. 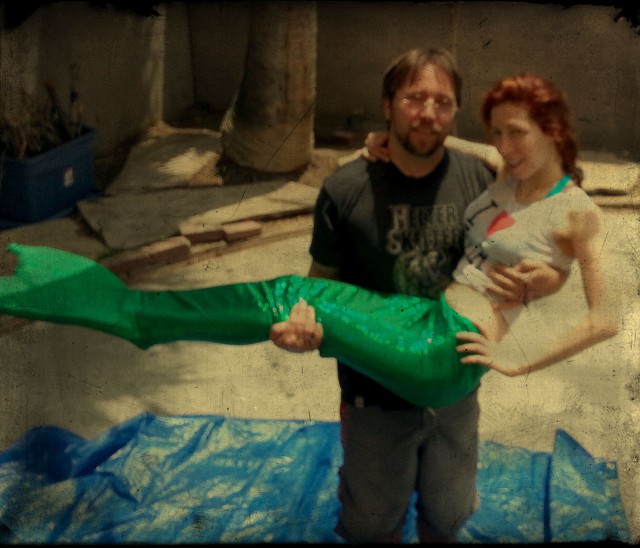 BT & Renee Kay behind the scenes. 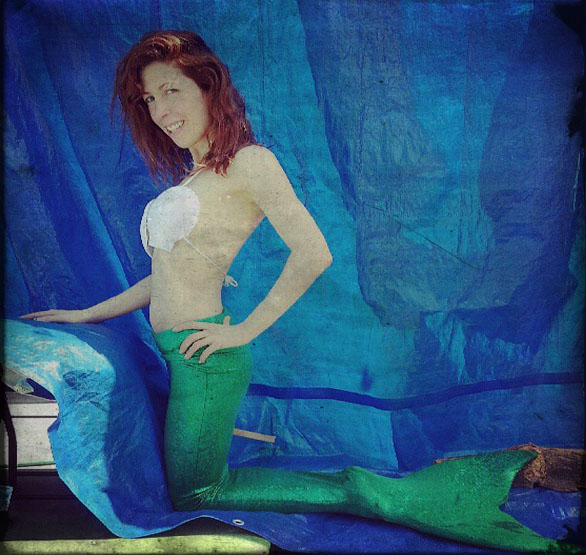 She was a bit apprehensive at first, but after a few weekends test shooting in a pool she has become really proficient at swimming with a monofin. We’ve also been testing out the underwater camera and figuring out all the logistics and technical restrictions of the shoot. Yesterday we were supposed to begin the shooting in earnest, however we ran into a few challenges and obstacles which prevented us from getting any usable shots.

If you checked out the story boards I drew up for this shoot (posted in a previous entry of this blog) you will see that the sailor character is in a small boat. For weeks we have been searching for a boat to no avail. Yesterday I started going to lakes and knocking on the doors of lake homes and explaining to perplexed and apprehensive people about my situation. The exchange went something like this:

Me: “Hello…um…This is gonna be a strange request, but um…My band is shooting a music video and we need a small boat.”

Me: ..Sooooooo, I was hoping maybe we could borrow a small boat if you have one you are not using at the moment and we’ll put your name in the credits…and you can be an extra in the video if you want…and there will be pudding…and dry roasted pistachios…and organic blue chips and…”

Random Lake House Resident: “What band is it?”

Me: “The Brian Travis Band…we are kind of a big deal…well not really…but we are making a video and we have zero budget and not a lot of time so…”

Random Lake House Resident: “I think I have a boat…it’s small and has not been used in a long time, and you can use it but just don’t rip me off…bring it back when you are done shooting.”

Me: “Really!?  OMG awesome. I’ll bring it back, I promise. Here is a copy of our new CD…All my contact info is on it…I can leave you one of my guitars as collateral..”

Random Lake House Resident: “No, no, I trust you. Just bring it back when you are done. You can keep it as long as you need it.”

And that is the story of how I acquired a small sail boat for our video!  Sometimes you just have to knock on the doors of perfect strangers.

I borrowed my brother’s truck and loaded the boat into his cab.  I strapped it down with tie-down-thingys and drove the truck 40MPH on side streets all the way from Agoura Hills to the pool that we were shooting at in the valley.  I got the boat there without incident, but as I was unstrapping the tie-down-thingys I heard a loud “CRUNCH” and looked up from my wrangling and saw that the front of the boat had shattered the left back window panel of my brother’s truck.

That pretty much sent me into a tail spin of anxiety, effectively erasing the triumph of the boat acquisition. I held in my disappointment and frustration about damaging my brother’s borrowed truck but my mood was visibly altered for the rest of the shoot. No matter how hard I tried to let that go, it was very difficult to shake the bad feeling as a result of damaging my brother’s truck.

We carried on and washed off the boat and put it into the pool and it is indeed the perfect boat. We wrapped things up after some more practice shooting our mermaid swimming in the tail and made plans for a whole day of shooting the following day. 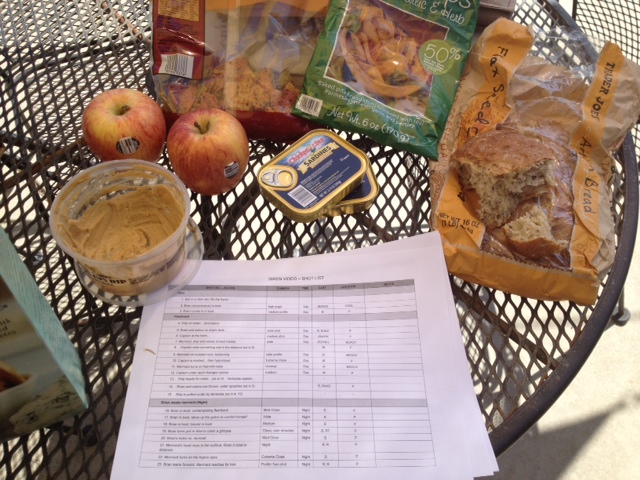 I woke the next morning to a phone call from the director. The make up person who was supposed to come was sick…she also had the extra cameras and the lights which were also not going to show up. This rendered shooting the mermaid scenes as a non-option. We called off the first half of the shooting day and instead I scoured thrift stores to get more costume pieces that we needed while the director hot glued starfish onto hair clips. We met back at the pool that afternoon to shoot my scenes on the boat. Thankfully shooting those scenes moved along smoothly and we got a few really great shots in the can.

As soon as we were shooting official takes I began to feel better (and much more hopeful) about the project. Our makeshift bluescreen is actually gonna work to make it look like the boat is adrift out in the middle of the ocean and we’ve decide to shoot an number of other scenes the same way. 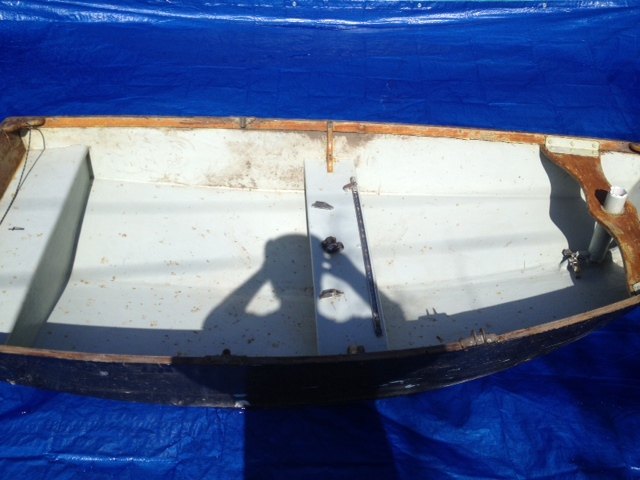 The boat in the pool with bluescreen.

I’m currently setting up a way for those who may be in a position to help out financially – to help us come up with a budget for this video shoot. The information below is also posted on http://www.briantravis.com on the news page (or will be as soon as we update it!).

CONTRIBUTE TO HELP THE BTB MAKE A MUSIC VIDEO

We are currently working with director David Barlia on a music video for The BTB song “Siren”. It will be the first official music video from the new CD, The Coyote & The Crow. Shooting for the video has already begun and will continue for the remaining weekends in June.

Storyboards have been drawn up and an animatic has been created to show the pacing and the concept of the video. The band needs to accumulate a number of things (including financial donations) to ensure that this project goes smoothy. We are reaching out to our fans and friends who may be in a position to help us with this endeavor.

If you are interested in donating to the cause or investing a sum of $ into this project to help us ensure we have the things we need to make it a success please donate what you can via paypal below. You can contribute as little as $5 (just a tad more than a latte from starbucks) or as much as $10 or $20. If you like, you can contribute more than once if you are compelled to give more. The individual or group who contributes the most will receive a signed copy of the original storyboard art that was hand drawn by Brian Travis.

Go to the NEWS page at http://www.briantravis.com for the paypal button to contribute, or just log into your paypal and send $ as a “gift” to tastethismoment@hotmail.com

If you contribute to the cause to help the music video become a reality we will also put you in the credits of the video as an investor/producer and you will get free tickets to our screening event/concert in August when the video is ready to be screened.

Here is the link to the animatic: http://vimeo.com/66520246 The password to view the animatic is: memakemovies

Watching that animatic should give you a good idea at how much work has already gone into the making of this video. Helping us finish it with a financial contribution is a fantastic way to support the Brian Travis Band!

Many thanks in advance!

One thought on “The making of the “Siren” music video.”