Got back to LA just in time to play a show at The Chocolate & Art Show that was hosted by The Monk Space in Koreatown. Over 50 emerging artists from La and San Francisco were showing their art on the walls and there were three bands booked to play and The BTB were asked to headline the night.

We had to bring our own gear and I was at the venue early to set up the PA. A really talented Jazz band opened the show and a very pretty singer/songwriter also performed before our set. The place was packed with people and once we kicked into our set the crowd began to hoot and holler. We got a really great reaction from the crowd and the band was feeding off the good energy and giving it all we had. There was sweat dripping down into my eyes until they began to sting. We just dug in deeper and rocked that place. It was a really great show. Somewhere in the middle of the gig I let the crowd know that we were not getting paid to perform and asked for their support in the form of tips, or CD sales. I also mentioned our next show and informed them that they were welcome to sign our mailing list.

The show ended to a large amount of applause and we even were asked to play an encore. It was such a great gig, that I was shocked at the end of the night when I looked into my tip hat and there was only $2 in it…the same $2 that I put into it before we started in order to ‘seed’ the tip hat. Three people signed the mailing list (out of 300) and I was sort of let down by the lack of generosity and support after such a well received performance.

I’m trying hard to remain positive because the people who put on the night loved our sound and our energy and are sort of falling all over themselves asking us to play the next one in September. Also, a lot of people said some really wonderful things to me about the music after our set. So, I will not vent here on my blog, but I will post a picture of a vent that I posted on FB. It pretty much sums up my angst about the music biz in LA…an angst that I am sad to say consumes me at times. 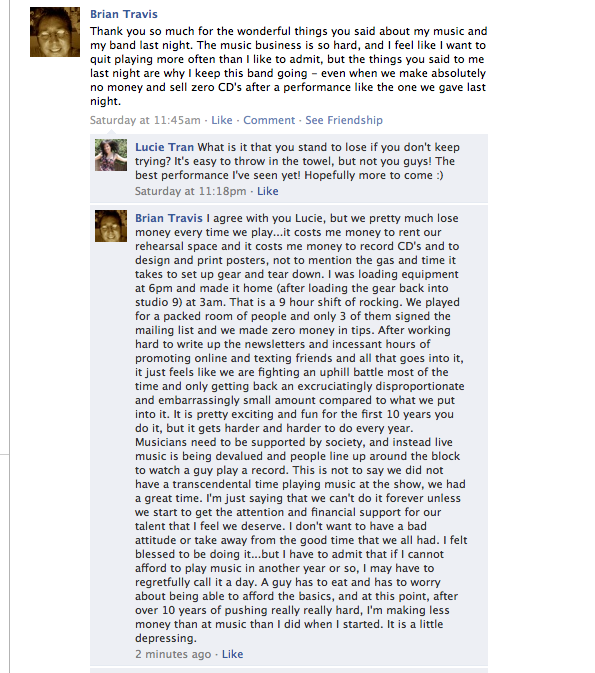